Before the popularity of Leyland Cypress, Arborvitae reined supreme! In the genus Thuja (Greek for Juniper), these are graceful evergreen needled trees. They make beautiful evergreen hedges, and upright specimens.

Thuja occidentalis tends to be a tighter species with little to no taper as they increase in height.

Thuja plicata and its cultivars and hybrids are known to be more deer resistant than T. Occidentalis.

Now that we are firmly planted in Autumn, many deciduous plants have begun to shed their leaves. At this time of year, shrubs with showy berries really prove their worth in the landscape. One of the best for fall berries is Ilex verticillata.

Although there is a range of color in the various cultivars and hybrids, red is still the most prevalent in this species. The tips of the branches are covered in berries this time of the year. The berries cling to the twigs long after Christmas Stroll, even when cut and used to accent lying, wreaths, and planters. That’s why so many landscapers and home gardeners use it for seasonal decorating.

Winterberry loves low lying, moist, fertile areas. It will do well in part shade, but situated in full sun, it will produce the most berries. Keep in mind that these plants are dioecious, meaning male and female flowers are produced on separate plants. I order to ensure good pollination of the berry-producing females, it’s a good idea to plant at least one male for ever 20 females. That male can be located up to 50 feet away. If your new planting is on an area of the island with lots of native winterberry, you might not need to plant males, but it’s a good practice, just to hedge your bets.

NOTE:  The Polly Hill Arboretum on Martha’s Vineyard has been doing work with winterberries for a number of years.  We recently contacted them to see if they had any recommendations for good winterberries on the Cape and Islands.   ‘Winter Red’ was their cultivar of choice. 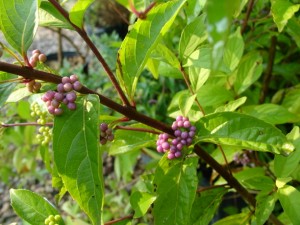 Using plants that have colorful fruit is a great way to interject long-lasting color into your landscape. Especially in fall, when we feel comfortable with the focus of the garden shifting away from flowers. The unusually purple fruit of Callicarpa will bring a welcome burst of energy to any landscape in late summer and well into the fall.

These graceful shrubs can reach 5 feet tall in ideal conditions. Full sun is best, but they lend themselves very well to planting at the edge of a wooded area where they will do well in part sun. They prefer an evenly moist root zone, but don’t require overly fertile soil to perform. And they are easy care, too. Maintenance is limited to removing dead branches in spring. If they do become overgrown, or overly twiggy, they will respond well to a major rejuvenation, by cutting back to within a foot of the ground. With no pest problems or disease issues to speak of, Beautyberry is a great plant for Nantucket! 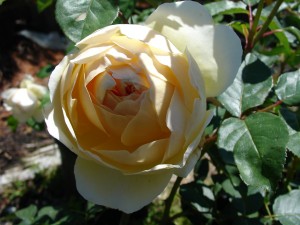 Technically, Modern roses are those roses bred after 1867. There are 14 categories for Modern roses, but Hybrid Teas, Grandifloras, and Floribundas are the best for cutting. They produce long stems with showy flowers that hold up well in a vase. David Austin’s English roses are a great choice as well.

Unfortunately, it is true that Modern roses suitable for cutting require more work. Your reward for all that spraying, fertilizing and pruning is spectacular form, color and fragrance, that cannot be matched by Landscape Roses (or possibly, your florist!)

Take your time to meander through our rose section to see a wide variety of roses that will make your home and garden all the more beautiful.

Although roses have a reputation of being difficult to grow, there are many roses that will perform even under less than ideal conditions with minimal care.

“Landscape Rose” is a general term for shrubs that bloom over a long period, are disease resistant, have attractive foliage, will perform in a range of soil types, and don’t require loads of specialized pruning to look great for the entire growing season. Roses like this can be used as focal points in a mixed border, or as mass plantings. They are also a good choice as the central player in large containers. Some of the most common are:

We regularly carry these roses and our inventory is constantly changing. Please inquire as to what we have in stock. If you need a particular variety, stop by and make a request, we are always happy to order any rose that is available for our customers. 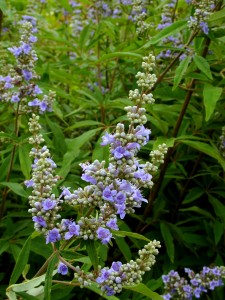 When we start getting questions about Lilacs in August, it’s sure that Vitex are blooming on the island. There are few flowering shrubs more beautiful than Vitex agnus-castus. Although this is one of the last shrubs to leaf out in the spring, it more than makes up for it in August.   That’s when the entire canopy is covered in purple flowers, that are not dissimilar to French Lilacs.

Vitex loves to bake in the full sun, with its roots in well drained soil. Although it must not be allowed to dry out immediately after planting, Vitex is considered drought tolerant. Its fragrant foliage is seldom bothered by deer or insects. It’s just a great shrub for the late summer garden!

Maintenance is limited to annual pruning in spring. Remove any dead or damaged branches. Tip flowered branches back to 2 sets of buds, to encourage strong growth during the upcoming season. Remove any wispy twigs smaller than a pencil, cutting right back to their point of origin. Finally take a step back, and make any last cuts to form a rounded shape.

We carry Vitex in a variety of sizes. We likely have a plant in stock that will fit your needs.

Hibiscus syriacus, or Rose of Sharon is one of the stars of the late summer shrub border. It’s hard to miss a large planting covered in tropical-looking flowers in August.

Rose of Sharon prefers rich, moist, well drained soil. But they will perform well in average garden soil as long as they get enough water in times of drought and at least 6 hours of strong sun during the day.

There is a variety of cultivars available with single, semi-double and fully double flowers. And their color ranges from pure white to deep fuchia with a range of bi-colors in between.

They are most often grown as a bushy shrub, but if allowed to grow naturally they can be used as small multi-stemmed trees. Standard Rose of Sharon trees are available, too. Grown this way, they make a perfect focal point in the landscape.

Because they lend so well to pruning and shaping, they can be used in a variety of landscape applications. They make a beautiful hedge for summer. They work very well in a mixed shrub border. Or mix them into a hedgerow at the property edge for screening. Or just plant one by itself to make a bold statement late in Summer.

Consider the cultivars below for you next planting. 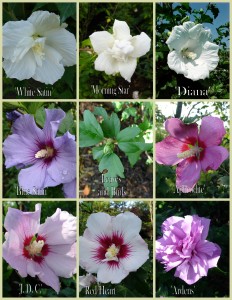 Beautiful, long lived, and versatile, boxwood is a wonderful addition to any island garden. We stock many varieties in a wide array of sizes for every situation. Pictured below are many of the varieties and cultivars in the yard today! 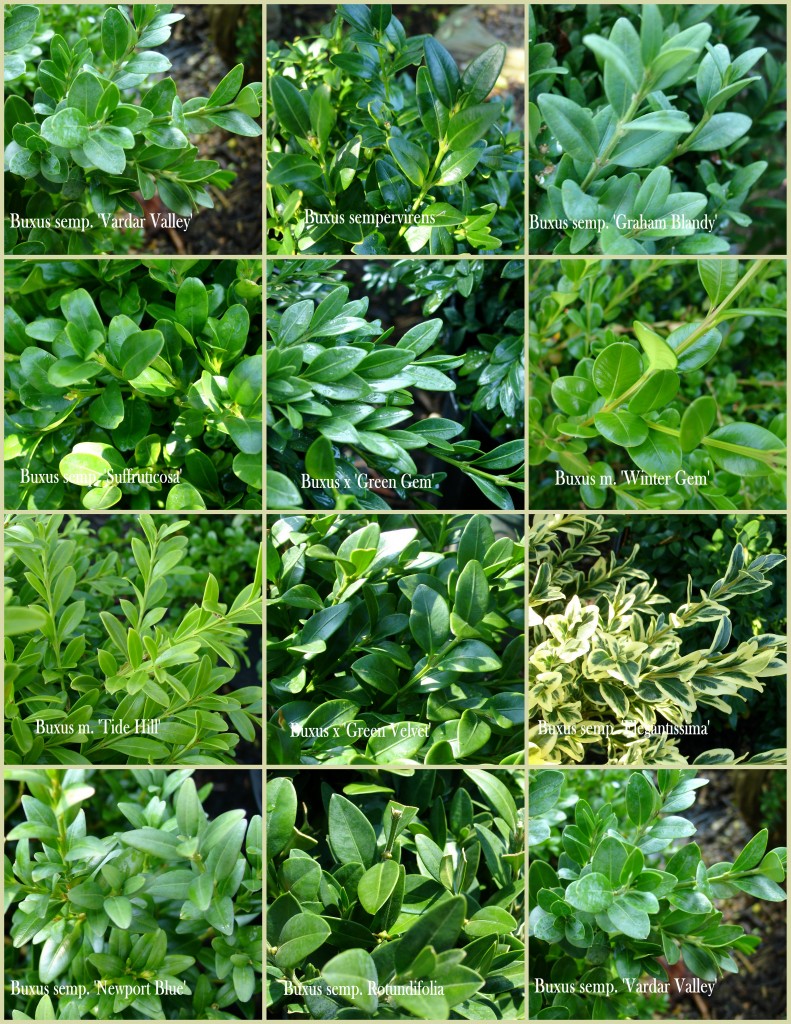 “Screening” is the term used by landscapers for plant material that hides an unwanted view. We get questions weekly at the Nursery about the best type of plants to use for this purpose. It’s one of those problems that doesn’t have a perfect solution on Nantucket. However there are several trees and shrubs that will provide a year-round living wall that won’t be decimated by deer.

Medium to short hedges can be created with boxwood. Buxus in all its forms is an extremely deer resistant, evergreen plant for us on Nantucket. Boxwood lends itself perfectly to shearing into hedges, but also looks great allowed to grow naturally. Many people are surprised to learn that American boxwood, Buxus sempervirens, will grow slowly to upwards of 15 feet, making a very dense screen.

In situations where a tall hedge is needed quickly, trees are a better option. The most deer resistant of these are Thuja plicata cultivars like ‘Green Giant’ aka ‘Spring Grove’, Ilex opaca (American Holly), Cryptomeria japonica (Japanese Cedar) and trees in the genus Picea (Spruce) and Pinus (Pines).

Because evergreens hold their foliage all winter, they are more susceptible to desiccation than deciduous trees. Keep these points in mind to help your plants make it through the winter with the least amount of damage.

Potentilla is another deer-resistant plant to add to your arsenal.  These small to medium sized shrubs have been popular for years, and for good reason.  Their compact habit and gently arching branches work well in mixed shrub borders, foundation beds and mass plantings.  Planted in full sun, they are super-low maintenance, tolerate many types of soil and boast flowers from June to frost.

There are more and more cultivars to chose from, but below are some of the most common. 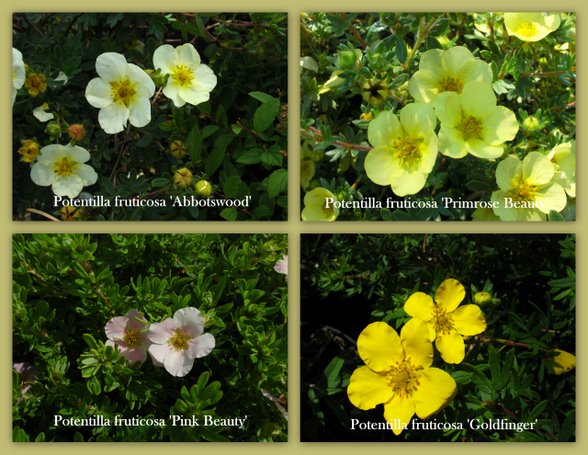