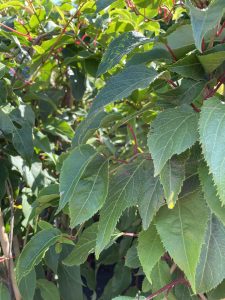 A great many years ago, I was visiting a friend’s farm back home in Nova Scotia and noticed a wild-looking plant covering a shed at the edge of the property. It was a huge tangle of broad leaves and tendrils from the soil up past the roof line. I had never seen anything like it, so I asked her what it was. She told me that it was a kiwifruit.  The only kiwi I was aware of were brown, fuzzy, tropical fruit that you could buy at the grocery store, so I just assumed she was off her gourd and moved on.  Since then, I have learned a lot more about plants and have grown to really appreciate the hardy kiwi species that are available for gardeners in the northern hemisphere. We have offered both Actinidia kolomikta (Arctic Kiwi) and Actinidia arguta cultivars in the past.

Hardy Kiwi are native to Eastern Russia, Korea, Japan and parts of China. These plants are extremely vigorous vines with twining tendrils that require strong support.  Their leaves are generally glossy-green and oval shaped, but there is variation among the cultivars and species.  Some are more serrated, or with red leaf-stocks and vines, others are even variegated with pink and white splotches.  Hardy kiwi have no particular pests to speak of (which is a marvel for a fruiting plant).  These kiwis are smaller than the typical grocery store kiwi, but the skin isn’t fuzzy, so they can be eaten right off the vine.

Like hollies, bayberry and many other plants, hardy kiwi is dioecious.  So, just like people, they have separate male and female plants.  In order to get fruit, it is important to plant either a self-fertile variety like ‘Issai’ or both a male and female of the same species. ‘Kens Red'(female), for example, should be planted along with another male Actinidia arguta in order to fruit.  They do require specialized care to produce fruit dependably, so it’s a good idea to do some in-depth research if fruit is the major goal.  Proper pruning and trellising can really help with getting a consistent crop.  That being said, I’d highly recommend growing them just for their ornamental value.

If fruit-set is just a bonus, why not give one or two a try and just see how they do?  Any garden situation where a Wisteria would be the traditional choice could absolutely handle a hardy kiwi vine.  They are equally, if not more, vigorous but with more handsome leaves.  They would look stunning covering a pergola or trained up along the side of a building. If allowed to grow across the slats of a pergola, this vine would provide quite a lot of shade below.  They could also do a great job of beautifying the fencing around a tennis court or pool, while providing good screening.

Including edible plants in primarily ornamental landscapes has been gaining in popularity over the last number of years.  As hardy kiwis are both attractive and productive, I think they are a perfect addition to the wisterias, roses and clematis that most gardeners are used to planting.  So, if you are up for a little challenge, and have some room – hardy kiwi is a great new(old) plant to try!