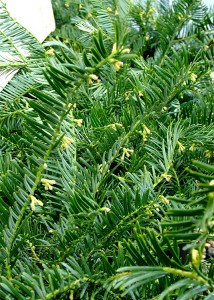 Island gardeners tend to grow few evergreen trees and shrubs compared to their counterparts in America.  Admittedly, it can be difficult to grow robust conifers and broad-leafed evergreens on Nantucket.  Desiccating salty winds and hungry deer can do a real number on them, especially in the winter.   But in town, or in a protected garden, free from deer, evergreens can be grown successfully on The Grey Lady

One of my favorite evergreen shrubs in Japanese plum yew.  This elegant evergreen very much resembles it’s namesake.  Like Yews (Taxus sps.), there are several species and forms on the market today.  We tend to carry Cephalotaxus harringtonia ‘Prostrata’ for use as a spreading form and Cephalotaxus harringtonia ‘Fastigiata’  for it’s columnar shape.

These cultivars are males, and will not bear fruit as many yews do.  The broad needles are a slightly shiny deep green color and look just like exaggerated yew foliage.  The green color persists in winter as long as the plants aren’t in an exposed location.  This makes them a nice alternative to boxwood, which can bronze or even turn bright orange in winter.  Although we can’t say Japanese plum yew is the answer to all your evergreen desires, it has proved to be very durable and somewhat deer-resistant in one neighborhood in Tom Nevers.

This plant will tolerate a number of conditions, but is best grown in shade.  It will flourish in moist, well drained soil and, once established, won’t miss a beat during short dry spells.  Try pairing the spreading types with plants that have broad, variegated or colored leaves like Hostas.  Why not go for the gold and pop in some spring bulbs like Scilla or Snow Drops to bloom in bare areas while the Hostas are still asleep in early spring?  The dainty flowers would look great set off by the deep green needles of the Japanese plum yew.  The upright form ‘Fastigiata’ makes a superb punctuation in the garden.  Plant it next to an entry or a funky container; it would also make a great hedge if well-maintained.