A favorite of early settlers, the American elm has fallen out of favor in recent decades. Since the onslaught of Dutch elm disease and the demise of thousands upon thousands of trees across America and Canada, many are afraid to plant them today. I’m happy to inform our customers that the island is actually a great place to grow elms! Nantucket is one of the few towns in America that still boasts hundreds of healthy elms planted and thriving along its streets.

Be assured that there are many varieties available that are resistant to Dutch Elm Disease and other insect and diseases.  Some of these are cultivars of Ulmus americana, our native elm tree.  But there are other species as well, like Ulmus parvifolia, Chinese or lacebark elm, and many hybrids.

American, hybrid and Asian elms are generally fast-growing, adaptable trees that are tolerant of poor soil, drought and even salt spray.  The species we sell are mostly large trees with ovate (oval-shaped) dentate (serrated) green leaves of varying sizes.  They make wonderful shade trees in the residential landscape as well as excellent street and park trees in towns and cities.

In 2005 the National Elm Trial was planted with a large variety of test plots across the country.  The results of this ten year evaluation can be found  on the Colorado State University’s website.  The results from the Vermont test plot can be found here:  https://bspm.agsci.colostate.edu/files/2013/03/Vermont-Elm-Trial-March-1-2016.pdf 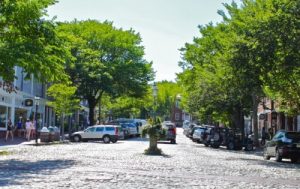 Some of the best that we carry are listed below:

Ulmus americana ‘Princeton’: Described as an excellent vase-shaped form by Dirr.  Very fast growing, with large, deep green leathery leaves.  ‘Princeton’ did well in the National Elm Trial test plot in Vermont, and is a recommended variety.  This tree is likely to grow sixty or more feet tall.

Ulmus Accolade(r) aka ‘Morton‘: A hybrid elm, with deep green foliage. American elm-like shape.  Accolade (r) did well in the National Elm Trial test plot in Vermont, is a recommended variety.  Grows 50-60 feet tall, with a spread of up to 40 feet.

Ulmus Allee(r): A hybrid, this variety looks a lot like Chinese elm, with the overall shape of American elms. The canopy is wider, somewhat less vase-shaped than American elms.  Mature trees are easily identifiable by the orangey colored lenticels that form on the furrowed bark. The green glossy leaves are smaller than American elms. Very resistant to Dutch elm disease.  This tree will likely reach 60-70 feet tall in ideal conditions

Ulmus ‘Patriot’ aka ‘Prospector’:  Released in 1993, this elm is a modern hybrid of American and Chinese elm species with excellent resistance to Dutch elm disease and elm leaf beetle.  It has a moderately vase-shaped canopy.  ‘Prospector’ did well in the National Elm Trial test plot in Vermont, and is a recommended variety.  The deep green, glossy leaves are 4″ long and 3″ wide, changing to yellow in fall.  These trees are expected to grow to 50 feet tall.

Ulmus parvifolia ‘Dynasty’:  This Chinese elm was bred at the US National Arboretum from seeds that were brought to America from the Forest Experiment Station in Keijo, Japan in the early part of the last century.  The canopy of this elm is more rounded than American elms, with the fine foliage characteristic of their Chinese cousins.  These trees are expected to grow to 50 feet tall and nearly as broad.