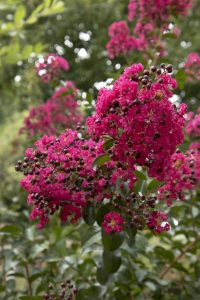 Everyone loves flowering trees.  When in bloom, they can change the entire look and feel of the landscape, especially if there are many trees planted throughout a property.  Ornamental cherries and pears make up the vast majority of the flowering trees that we sell at the nursery, but there are lots of lesser-used trees that are also very beautiful.  In recent years, we have had more and more customers including Crape Myrtles in their gardens.

The genus Lagerstroemia has more than 50 species, but most of the landscape-worthy plants we offer are within the species indica and fauriei or hybrids of those.  These deciduous trees and shrubs are native to India and Asia, including China, Japan and Korea.  They prefer full sun and fertile, moist, but well-drained soils.  Crape Myrtles come in a wide range of sizes and flower colors.  The leaves are a deep, lustrous green, and often turn amazing shades of red and orange in the fall.  Most cultivars have handsome bark, that exfoliates, giving the trunks an interesting mottled appearance.  The enormous paniculate (botanical jargon for many flowers joined together on a branched central stalk) flower clusters are borne on the tips of the branches and generally open in September on Nantucket.

Because these trees are technically marginally hardy here, we always suggest planting them in a protected spot in town.  In reference to Crape Myrtles, the authority on woody landscape plants, Dr. Michael Dirr states, “…-5 to -10 F is about the breaking point between a woody plant and herbaceous perennial.”  However, there are quite a few large Crape Myrtles on the island that have survived some of the colder winters we had a few years ago.

Crape Myrtles flower on new wood, so they are often pruned severely while dormant, forcing a lot of new growth annually.   That being said, I much prefer the look of a tree that is artfully pruned to a balanced framework instead of heading the entire plant back to an arbitrary height.  When pruned this way, they can have a lovely shape that is nice to look at, even when the branches are bare in winter.

We’ve had many cultivars over the years, but a few of the most common are listed below with their attributes: