Ten years ago, when I was still gardening full time, most gardens had at least a few shrubby Caryopteris x clandonensis cvs.  This drought-resistant sub-shrub has grey green, deer resistant foliage during the growing season and airy blue flowers from late summer into the fall.  They look great planted en masse, or as accents in perennial borders.  But these plants are not without their problems.  If not grown in well-drained soil, then can rot over the winter or succumb to phytophthora root rot diseases.  And even though they are rated for our zone, long periods of exceedingly cold temperatures over the winter can also severely damage or kill them.  But there is a new Caryopteris on the scene, Caryopteris divaricata.

Caropteris divaricata is a completely different species of this plant, native to the Himalayas.  These are herbaceous perennials, dying completely down to the ground in winter and re-emerging from the crown in late spring.  They prefer full sun and fertile, but well-drained soil.  The green or variegated foliage has a distinctive aroma when crushed, reminiscent of old asparagus or green peppers.  I believe this odor is what makes them so averse to deer.  Although they flower late in the summer/early fall, they definitely have their merit.  I’ve always felt that using some tall, late-blooming plants in the back of the border is a great way to extend interest late into the growing season.  When so many other plants are blooming like crazy in summer, the foliage of these plants allows the eye to rest a bit, which makes the overall composition more enjoyable.  We’ve stocked two cultivars in the past: ‘Blue Butterflies’ and ‘Snow Fairy’.

I planted a big group of ‘Blue Butterfiles’ in the back of our garden last year, and have been very impressed with how sturdy their stems are and the plants overall size.  Year two, they are easily 6′ tall, filling an area between two large Hydrangeas very effectively.  I did notice considerable self-seeding this spring, but the volunteers were easily uprooted when they germinated and weren’t any trouble.  The flowers are profuse and very pretty when they arrive in September, but certainly best enjoyed close up.

I also planted some 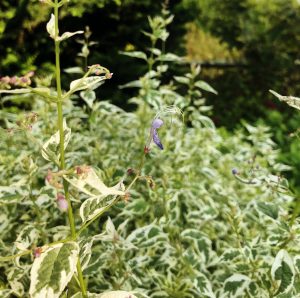 ‘Snow Fairy‘ in a different spot so that I could compare them.  This plant has been a real star.  So much so, that I am planning to plant another group further down this year.  The best part of this selection is the splash of white in the foliage.  When other plants are beginning to look tired with the heat of August, this Caryopteris is coming into its own.  The mid-green leaves have a varying degree of variegation, giving the plant a bright fresh look.  ‘Snow Fairy’ is shorter in stature than ‘Blue Butterflies’, making it more versatile.  Ours are just beginning to flower at 4′ tall.

When there seem to be fewer and fewer plants that are reliably deer resistant, it’s nice to have another plant to add to your arsenal.  I’d highly recommend giving Caropteris divaricata a try.